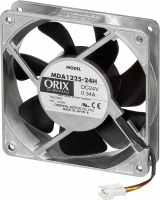 Axial flow fans use a blade (propeller) to generate air flow in the direction of the axis of rotation. Capable of generating a large air flow, axial flow fans are suited for applications requiring ventilation and cooling where the entire space inside the device must be cooled.
Features
Product Line


Fans with Connector are Available

Connector types are available for □180 mm of the MRS Series, MRE Series, MDS and MD Series, and MDA Series. With the use of a connector, the fan wiring process can be simplified. Maintenance is also easy as it only requires the connector to be removed and inserted when the fan needs to be replaced.

These are equipped with a low-speed alarm function that outputs a signal when the cooling fan speed drops.


Items in this series conform to the UL and CSA Standards, and also have the CE Marking (EMC Directive) affixed.


Items in this series conform to the RoHS Directive that prohibits the use of six chemical substances including lead and cadmium.